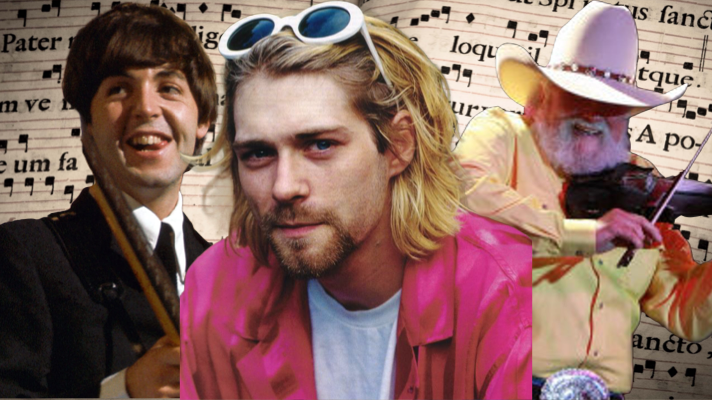 Notably one of the most notoriously famous songs for it’s interesting title and lyrics, Iron Butterfly’s In-A-Gadda-Da-Vida was the product of a night of over-indulgence. Originally intended to be titled “In The Garden of Eden”, the story goes, Vocalist Doug Ingle wrote the title on the demo copy as we see it appear now while heavily under the influence. Ironically enough, the record company tasked with producing the 17 plus minute track decided to keep the name as it sounded, “Exotic” according to SongFacts, which would help them stand out to the public alongside The Beatles and Rolling Stones who had been drawing from Indian influence.

There’s no doubt in our minds Charlie Daniels is a hell of a musician and one of, if not the best, to ever pick up the fiddle! Now as far as a mathematician goes, maybe not so much. Let’s break down the set up to the Uneasy Rider fight scene for a second, “Jes’ when I thought I’d get outta there with my skin
These five big dude come strollin’ in
With this one old drunk chick and some fella with green teeth” so okay not five but… Six guys right? But hey, the benefit of the doubt, maybe one of those five just deserved some more explanation due to the natural color of his teeth. Now let’s fast-forward a few verses, “Now the last thing I wanted was to get into a fight
In Jackson Mississippi on a Saturday night
‘Specially when there were three of them and only one of me”, so now it’s three guys? Charlie, buddy, I don’t want to call you a liar here but your epic tale of how you escaped hillbilly hell maybe a bit of a stretch, seeing as there are so many inconsistencies. Then again, math was definitely my worst subject.

Wish You Were Here

While not exactly an unintended “lyric” this iconic piece of Pink Floyd history definitely deserves to make the list. If you’ve ever sat down and listened to the popular, Wish you were here, you may have noticed a pretty audible cough around the :44 marker. You’re not alone and you’re not crazy, the cough was left in the final track much to the disdain of the one responsible for it, front man David Gilmour. Allegedly, according to SonicScoop.com, this is what prompted Gilmour to give up smoking.

Prepare your ears for this one! Near the 2:55 mark of The Beatles famous Hey Jude, should you listen closely you can audibly hear one Sir Paul McCartney, uttering “fucking hell” upon messing up a chord. Now while this clearly was unintentional, the decision to keep it in was not! The story goes that Lennon and the others found it so funny and being it was rather quiet under the music, just to leave it in the final cut. So, next time your local oldies station decides to spin the acclaimed track, keep your ears open to see if the station heads have caught on, or if you need to have a talk with the FCC.

Never the prototypical musician, Kurt Cobain was well documented for his unique approach to his music. From his throat-centric singing to his self-taught guitar techniques, Kurt could turn what some would call being “untrained” into pure gold. During the recording of Nirvana’s Polly, Cobain is audibly off on his timing coming into the third verse of the song resulting in him getting in a quick “Polly Said” before catching himself. While thia can easily be mistaken as a quick refrain before the final verse, it was completely unintentional. However, after recording fellow bandmates Dave Grohl and Krist Novoselic allegedly liked how this little slip-up sounded so much they kept it in the final cut! Unintentional? Could’ve fooled us!