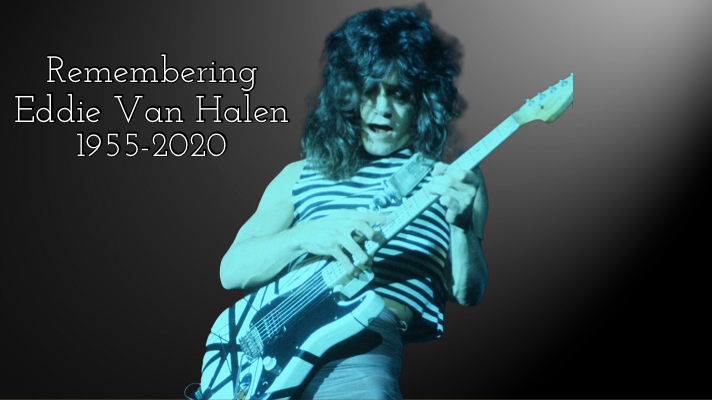 Eddie Van Halen tragically passed away on October 6th 2020 after a long battle with lung cancer. Eddie was diagnosed with cancer in 2015, and though he was a frequent smoke, attributes it to a metal guitar pick he would often hold in his mouth. While the music industry and the world as a hole are devastated at this lose, we are able to look back at the incredible life and career of the Van Halen Co-Founder and remember some of the lasting impressions and moments he has left with us. The following are just a few of the things we will continue to remember Eddie Van Halen by.

When thinking of Van Halen one image always seems to comes to mind, That guitar. Eddie Van Halen is well known for his custom hardware, the first and most famous of course being The Frankenstart. Comprised of a Fender Stratocaster body personally modified to fit a Gibson PAF humbucking pickup, which was encased in paraffin wax to reduce feedback due to the nature of it’s installation, and off-centered to allow the differently spaced strings of a Fender bridge to be able to be picked up. Removing both tone control knobs, Eddie opted rather to use one of the knobs marked “Tone” on his volume control. He wasn’t even close to done there however, When deciding on a pick guard EVH chose to shape a vinyl record over the controls, which was later replaced. Now onto that classic paint job. Originally painted black, Van Halen used gaffing tape to section off strips of the body before painting the guitar over again in white, then once more in red. Did I mention that later on in his career Eddie decided to add a sideways three way switch in the middle of his guitar that wasn’t actually connected just to throw off imitations. A copy of the Frankenstrat can be found in the National Museum of American History, but in April of 2019 the original was displayed in the Metropolitan Museum of Art.

Listening to Van Halen it becomes very clear, very fast, it’s all about the guitar. With all the time and effort he out into creating the instrument how could it not be! Eddie Van Halen is known world over as one of the greatest guitarists of all time. Playing with a wild and fast style that has yet to be replicated, Eddie used every possible aspect if the guitar. Known best for his signature tapping, a style of playing based around using both hands to hammer string on the neck of the guitar, EVH left us with some of the absolute most iconic and memorable solos of all time. Most notable, Van Halen’s instrumental track Eruption features a near two minute guitar solo from EVH popularly considered one of the greatest solos of all time. Featuring on the self title album Van Halen, The track leads perfectly into You Really Got Me, beginning in key of A flat and ending on E flat. Eddie Van Halen will forever go down in history as one of the greatest there ever was to pick up six strings.

Whether it’s prancing around in three piece brown suits in Hot For Teacher or flying across the stage in Panama, Eddie steals the scene. Eddie Van Halen was true superstar both on stage and behind the camera and always looked like he was having the time of his life doing it. Think back, when I say Van Halen music video, do you see Eddie in the scene that comes to mind? Who could forget him flying across the screen guitar in hand in Panama, or strutting down a library desk busting out one of the meanest solos of all time. These are images that have been engrained in our brains and society for decades. Not to mention my personal favorite, that cheeky smile in Jump knowing damn well the history he’s making with that guitar. Something just hits different in a Van Halen music video, and that something is Eddie.

Above all else the greatest gift EVH ever gave us was himself. Van Halen was formed in 1972 with brother Eddie and Alex, and have been a staple on our radios and in our homes since. A band like this with a line up this powerful only comes around once in a lifetime and Eddie was the force that brought it together. We will always have the unforgettable, iconic, and rockin’ tunes of Van Halen to remind us how legendary and unique Eddie Van Halen was. One of the greatest guitarists of all time, and one of the most influential musicians to ever take the world by storm, none of this happens without Eddie Van Halen. Rest In Peace.