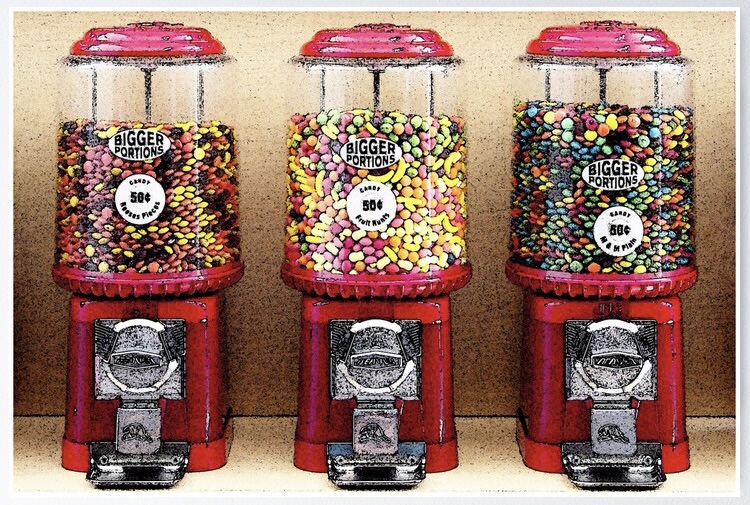 In the evening while at the laundromat I found myself in a predicament. I had a pocket full of quarters and a hankering for a delicious treat, but to my surprise  all the candy machines were empty… all but one.

Upon further inspection of this specific machine I noticed that this was not a candy I could buy but instead a sticky mound I liked to call Goo. This gelatinous mess seemed to be the byproduct of really old melted candy and an ill maintained laundromat but nevertheless I grew fond of the Goo.

As weeks passed I’d visit the Goo and was in awe of its progression, it never got bigger or more disgusting, it just seemed to solidify more and more over time. The Goo gained a following over time as well it became very famous on several social media platforms, everyone was overjoyed that the Goo was sticking around.

After a couple of months of this red Goo being the only thing in these candy machines I figured the Goo would never go away. It was reliable, but one sad night I found myself at the laundromat and as I went to check on my old friend the Goo was nowhere to be found, in its place SKITTLES!! I wouldn’t think it’s odd if they had filled the rest of the candy machines as well, however the only machine that has candy in it used to hold the Goo.

It’s my belief that the Goo is still there hiding just beneath the skittles which means two possible outcomes: one the skittles add to the Goo with the impending summer heat that’s coming our way or two enough people use their quarters to buy the skittles and uncover the illustrious Goo.

I know I’m romanticizing melted candy but it was a friend and I will always cherish the time we had together and I hope to see the Goo return in all its glory someday until then farewell old friend.