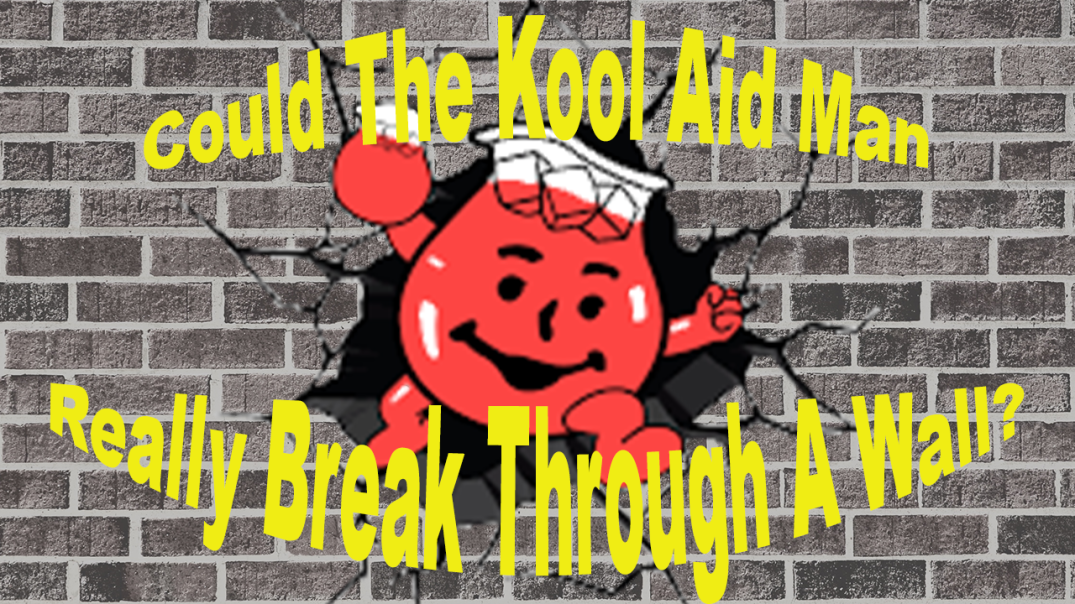 Bricks and mortar are pretty strong. It would take pressures 67 times that of our own atmosphere for a brick to start to crumble. Not only that but to break through a brick wall would require the kinetic energy equivalent of a bullet fired from an M16 rifle.

Now that we know this the obvious question arises…Could Kool-Aid Man Really Break Through a Wall? So let’s say we have a pitcher, but not just any pitcher, this is a sentient humanoid pitcher that comes in at 6ft tall. When scaled to that size the glass would be 3.6in. Kool-Aid man or K.A.M. for short would also be incredibly heavy. His dry weight would clock in at 5,800lbs, but we need to fill him with 607.6 gallons, that’d be 1150 cans of soda, which would increase his total weight to 11,000 lbs. He would weigh roughly the same as an elephant.

We tend to think of glass as fragile, pretty thin, and that’s because the kind we interact with, generally, is. However, glass is surprisingly strong. It can withstand pressures up to 469 times that of our own atmosphere – 7 times more than brick – and takes twice as much energy to break. Since KAM’s glass is 3.6in thick, that would be enough to not shatter when hitting a brick wall. In fact, his enormous mass means he’d only need to be going at an average running pace to have enough energy to bust through said wall. But let’s talk about his weight for a second – as we know from the square cube law, you just can’t scale something up and expect for it’s legs to be able to support the now incredibly large body. Lucky for us, since KAM’s legs are made of glass, which can withstand such immense pressure, his legs could be the diameter of a quarter and his feet the area of 3 postage stamps and he wouldn’t collapse under his own weight. So can KAM break through walls?…Oh Yeah!