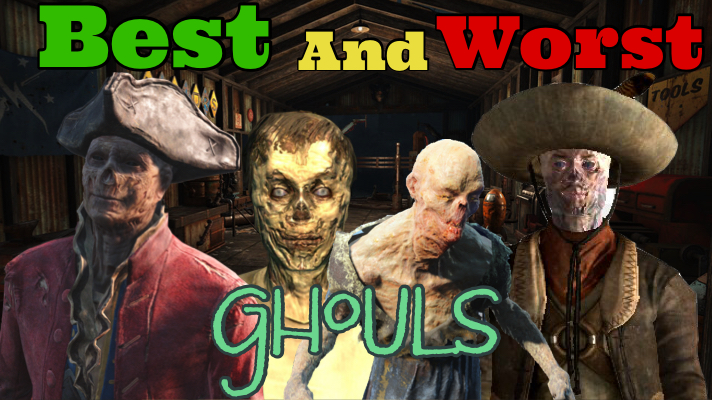 For those of us who weren’t fortunate enough to seek shelter from the events of total nuclear annihilation in a state of the art underground vault brought to you by Vault-Tec, 200+ years of residual radiation will take it’s toll. Regardless of which game played host to your first encounter with one was, we all recall our first interaction with a ghoul. There are some out there who despise them, some who fight for them. and those who simply ignore them. Regardless of where you stand one thing is for certain, all ghouls are not created equally. We took a detailed look at the series and decided who are the best and worst ghouls in Fallout!

An easy going, radio listening, rotting, bartender, We meet Gob in Megaton‘s Moriarty’s Saloon in Fallout 3. Gob is no stranger to the waste ridicule on ghouls and isn’t afraid to show it. While you do have the option to continue these antics and refer to him as a zombie, the latter shows how appreciative Gob is towards the civility. Possibly the only person in Megaton without his head firmly planted up his ass, Gob is also a solid source of information about his fellow residents as well as on the journey to find your dad.

A prisoner found in the Mohave Wasteland, Raul has all the making to be one of the absolute greatest characters in the series. Voiced by legendary actor Danny Trejo, Raul comes to us with an interesting backstory, mustache, badass name, knowle of guns, and Mustache! So where does Raul fall flat? Unfortunately his biggest downfall comes by association.In a game like New Vegas with companion options such as Boone, Rex, and Gannon, Raul seems to fall by the wayside. While having the smokey, intimidating, legendary voice of Danny Trejo behind you may be awesome, the illusion of the ancient ghoul fades quick because of it. Apart from his voice and that sweet mustache, Raul lacks any interesting physical features coming off as just a typical ghoul.

A remonderonce again, you cannot kill children in Bethesda games. Billy Peabody is found inside a fridge in The Commonwealth. At first introduction he’s just a scared kid, a 200 year old scared kid who somehow never grew up, who just wants to find his parents. However, Billy makes it increasingly difficult to help him. No only do you have to deal with the fact he is a useless temporary companion in any altercation, but if you can put up with that then his non-stop bitching will set you over the top. Seemingly every 5 minutes this kid is whining about this, crying about that. It’s just one of those times where a character fails to be sympathetic to the point of annoyance. Fortunately for the annoyed and evil players, you do encounter an option to have someone take him off your hands.

Ever dream of wandering the post apocalyptic radiation scorched earth with the decaying body of the man who proved he’s got the biggest balls in American history? Well you’re in luck!… Kinda. Actually the brother of the mayor of Diamond City, Hancock is a more recent ghoul self created by radioactive drug use. Hancock took up the name of the hung revolutionary and began serving as the laid back but never taken for granted mayor of Goodneighbor. Not only does the man have a cool, calm, collected complex that rivals Rob Van Dam, but when he gets down to it Hancock is all business. A companion that will provide hours of fun and compelling commentary and combat, Hancock is not only one of the greatest ghoul characters off all time, but companions as well.

Let’s be honest here, you blew up Megaton for one reason. You didn’t give a damn about Tenpenny, Simms, Cromwell or the entirety of the town. Moira’s endless tasks, childish voice, and oblivious personality that constantly put you in harms way crossed the line. You can’t kill her and make it out of town alive though you thought. Drastic times call for drastic measures. Boom! Bye bye Megaton. Upon returning to see your evil deed you find but one survivor. That bitch Moira Brown. Not only has she driven you to the point of using your own nuclear armaments, you did it for absolutely no reason. One last fuck you from not only the worst ghoul but one of the absolute worst characters.

Weather you love them or hate them the ghouls of Fallout impact the paths you take and the stories we make. Let me know who your favorite and least favorite Fallout ghouls are in the comment section below! Be sure to check out even more Fallout content on Style’s Rebel Radio Here!