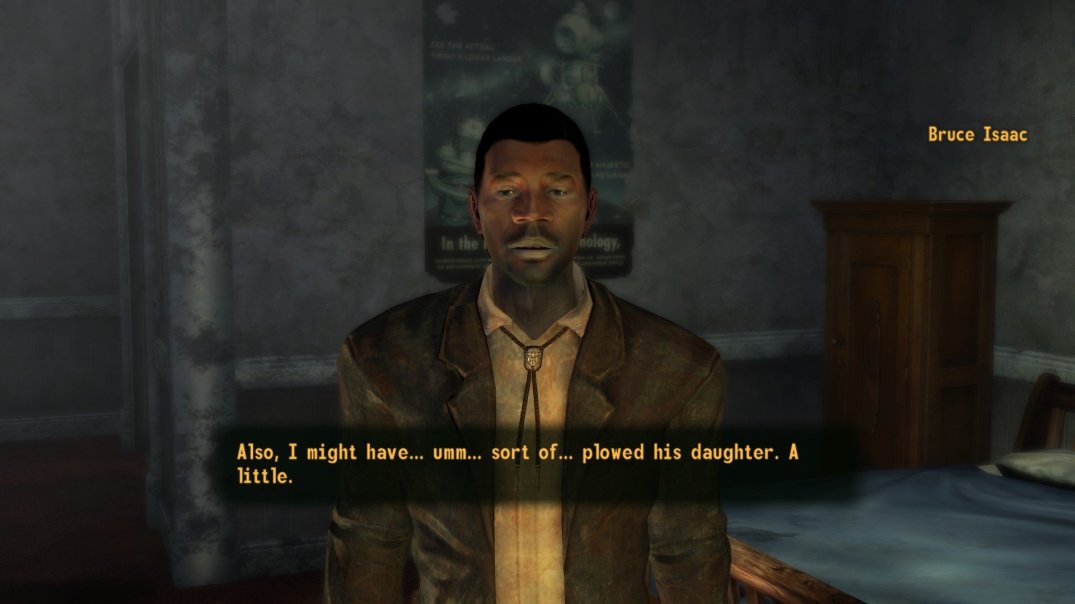 Before we dive in here let me make something abundantly clear, this list is a squeal. In order to check out all the great characters who made up the first list give Ol’ Easy Pete here a nice gentle click.

Now, it seems as though the last list of minor characters just didn’t cut it. While there still needs to be limitations set on just how many of these unique beings can be featured here, after further review we definitely could not live with ourselves without including these characters. Once again before we dive in I would like to remind everyone that the qualification these NPCs must meet is ultimately not having any form of barring on the main story or it’s outcome. With that in mind here are MORE of the greatest minor characters in the Fallout series.

Election season is upon is and who better to kick of this list than the president himself, president of The Republic of Dave of course. Let’s face facts here, you rolled up on this little “republic” as you were patrolling the capital wastes where, surprise surprise, you find Dave, leader of The Republic of Dave and from that first interaction you had it out for this pompous SOB. Naturally, seeing organized government working in the post apocalyptic society turned your stomach and with your vast knowledge of the democratic process begin poking around asking about the election of Dave. As you begin to learn more about the ill constructed, incest filled republic, you come to find out The Republic of Dave derived from the The Kingdom of Tom, which derived form The New Republic of Stevie-Ray which itself derived from Billyslvania by way of The Republic of Stevie-Ray originally being formed after it’s predecessor The Kingdom of Larry. Dave is but a spoke on the wheel and you are about to ensure that wheel keeps turning. Whether you choose to oversee the electoral process yourself or “you gotta shoot ’em in the head” you made damn sure Dave got his reality check and you loved every minute of it.

For someone not considered a “main” character, Fallout NV does not happen without Doc Mitchell pulling your ass out of the dirt and fixing you up. While we’re on the subject though, why the hell was this dude rooting around a fresh grave and playing with what he found. Regardless after Frankenstein over here finishes digging the 24 caret run of bad luck out of your noggin he goes out of his way to ensure you can walk, talk, and take a Rorschach ink blot test. (Definitely two bears high-fiving BTW.) Not to mention if you were one of the lucky few you got to see this man’s head spin right round like a record while he asked you how you felt. Talk about a way to be introduced to a game. Doc Mitchell deserves more praise for not only being the sole reason you weren’t six feet deep on Benny’s dime through out all of Fallout New Vegas but for allowing a stranger to steal literally everything from his home.

First and foremost, We know that’s you Todd Howard. You aren’t slick. Fresh off hearing about how “it just works” you boot up Fallout 4 and see this familiar face. Upon his instance and no matter how much you may have tried to avoid him The Vault-Tec rep. locked you into a family plan at your local Vault, 111. Fast forward legitimately 6 minuets, and we see our persistent friend once again being denied access to that very same vault. “I am Vault-Tec” he shouts as we chuckle being lowered into safety while he is inevitably turned to nuclear dust. You take a quick ice nap and wake up 200 years in the future with no wife and presumably no son. Remembering you left the TV on, you head to what was once your neighborhood to find just how much damage nuclear warfare can accomplish. After some chit chat with good ol’ Codsworth you set out on your quest to find your son… and apparently act as Tye Pennington for the entire commonwealth. So your travels lead you to Goodneighbor, and after the live entertainment makes you feel some way you head back to the local hotel for a good nights rest. Why not rummage through other people’s stuff while I’m here, you think to yourself, so you open the first door and who do you find? None other than Vault-Tec himself. You smiled, don’t even lie. The only other human being… well kinda… you have had any kind of bond with in over 200 years. I don’t care who you are are what kind of character you are playing, I know damn well you invited him back to Sanctuary with you. Like it or not, this is the closest living person you’ve got out there who knows you and look at you now, best buds. Go ahead and tell me I’m wrong.

Strolling down the streets of an almost picture perfect small community where everybody seems to be in good spirits and family values have outlasted total nuclear annihilation you seem to get the feeling something larger may be at play here. The residents of Andale welcome and greet you with open arms, even going as far as to invite you over for dinner! However one particular resident doesn’t seem to hold himself to that same regard. Old Man Harris explains to you everything is not as it seems and these people are crazy. Hey, he’s just a crazy old an the townsfolk assure you, driven mad by the death of his wife. As much as you may enjoy the change of pace you need to get to the bottom of this and thus you take the old man’s advice to check out the shed out back. Ah yes, cannibals. When confronted about your trespassing you could take the rout of, Hey to each their own, but there is just something about distraught Old Man Harris that will linger in the back of your mind. So you kill a couple people eaters, no harm no fowl right? Reporting back to this lovable Old coot, he explains he will now be taking care of the two neighborhood children himself. While your interaction with Old Man Harris my be limited, should you ever stumble back near Andale, in the back of your mind he will always have a special place. Of course, there is always this gem to take with you courtesy of Old Man Harris himself, “Better an orphan than a cannibal I guess.” All of this may be for loss however if you have been roaming The Capital Wasteland cannibal perk intact.

It had to be didn’t it. For arguments sake, we will be referring to the original Mechanist in Fallout 3 as the Fallout 4 iteration can be argued to be an essential character.to the DLC “story”. While jamming out to the hottest station in all of DC, Galaxy News Radio, you learn about two “costumed cookes” holding up Canterbury commons. Strap in for one of the most out there missions in the game as you diffuse the superhero movie that is The Mechanist vs. The AntAgonizer. Everything about The Mechanist would make you forget you’re playing a Fallout game, other than the endless swarms of Robobrains ruining your day. Once you engage in conversation with the self proclaimed hero, you cannot help but sit there smiling as he does his best impression of a stereotypical comic book hero. Should you chose to align yourself with him in the fight against evil and convince his arch nemesis to throw down her guns, you’ll be walking away with her AntAgonizer garb. This right here is why this spot goes to The Mechanist rather than the former, while the Legion of Doom spikes of the AntAgonizer look cool enough, you know deep down you want to BE The Mechanist. Whether you achieve this by convincing The Mechanist to step down himself or by being true neutral and giving each of them a 10mm alternative to their comic book lifestyle, you know damn sure you’re walking out of there with that armor. Hell, The Mechanist was so well received for such a minor role they brought him…well her… back in Fallout 4’s Automotron DLC.

Once again we have come to the end of another Fallout list and I’m sure there are plenty of names that have been left off. That’s one of the greatest things about the fallout series as a whole however, no matter which games you prefer they are all packed full of unique and memorable characters that don’t necessarily need to play major roles to have a major impact on your experience. As always I’d love to hear who you think the best minor characters in the Fallout franchise are and who knows, maybe there will even be yet another list.