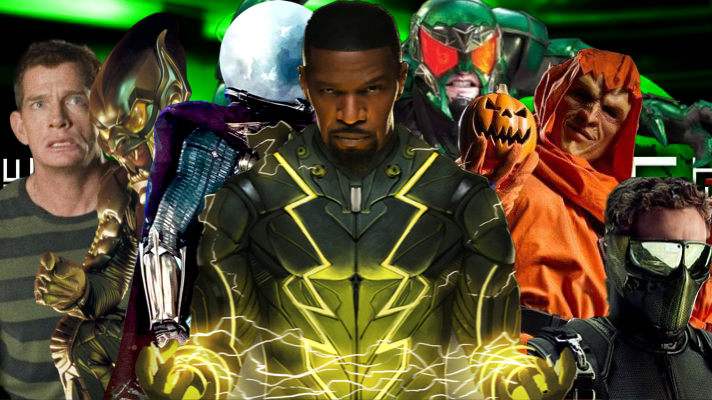 Spider-Man and The Sinister Six

Ever since the video of a video of an Adobe Premier file containing the next entry in the Spider-Man (Home) series was leaked, the internet has been a buzz about what the film may entail and if fan speculation will ring true. One of the biggest theories surrounding the multiverse film is the idea that the main antagonists will be a group of villains from the collective Spider-Man franchise based around the comic book’s Sinister Six.

Who are The Sinister Six?

First things first, who are the Sinister Six exactly? While there are many different variants and versions throughout the decades and series of comics, the core Sinister Six debuted in January of 1964 and consisted of their leader, Doc Oc, Kraven the Hunter, Vulture, Sandman, Mysterio (not Rey), and Electro. Later iterations if the group would include Norman Osbourne’s Green Goblin, Scorpion, Ned Leeds’ Hob Goblin, Lizard, and more. Spanning several eras of comics and multiple universes The Sinister Six has seen its fair share of variety over the years, but if this is the direction Marvel and Sony plan on going for the upcoming Spider-Man: No Way Home title later this year, who will fill the role of the Six?

At this time, the only visually confirmed villain to join the MCU family and feature in the upcoming Spider-Man flick is Otto Octavius, portrayed by Alfred Molina reprising his role from the 2004 Spider-Man 2 movie directed by Sam Raimi. This casting choice has lead many fans of the series to believe what they had been speculating on to be true, as Marvel dives down the rabbit hole of the multiverse, this leaves the door of possibility wide open for the return of the past Spider-Men including Tobey Maguire and Andrew Garfield. While Otto serves as the head of the Sin. Six in the original comic, we are lead to believe that spot will most likely be filled by our next entry…

All but confirmed is Willem Defoe’s infamous Green Goblin from the same series. The Now Way Home trailer saw the use of a very familiar Pumpkin Bomb and an even more familiar laugh. Should Defoe’s Goblin be introduced into the MCU and this proposed Sinister Six, who better to take the helm than the on screen villain who started it all? For our comic accurate audience, The Green Goblin would lead the Sinister Six on a few different occasions but most notably during the formation of the Sinister Twelve.

Another seemingly locked villain is the return of Jamie Foxx’s Electro as Foxx may have spilled the beans earlier in the year promising a return to the role without the questionable Blue electric CGI. Foxx’s Electro would see the first introduction of the Andrew Garfield Amazing Spider-Man series into the multiverse. The presence of Electro is also heavily hinted at during the short trailer as we see several scenes of what appears to be an electrical storm, with classic yellow lightning nonetheless.

Probably the farthest stretch for a return to the series is Michael Keaton’s Vulture from Spider-Man homecoming. We can’t rule him out because while the actor may be popping up on rival DC’s new Batman experiment, Keaton has not ruled out a return as the beloved Vulture. Filling in the Tom Holland era of Spider-Man villains, Vulture would be a much welcome and comic-accurate addition to the Six.

Another villain fans have been piecing together based on trailer scenes is Thomas Haden Church’s iconic Sandman from the Raimi series. No one can say the original trilogy didn’t have phenomenal casting… well except Eric Foreman as Venom. Much like Electro, large Sandstorms and seemingly mountains of sand appear in the trailer even at one point being hit by a bolt of electric we can only assume was courtesy of Electro.

While the majority of these are still speculation, there is even more about the final lineup regarding a sixth member. Keep in mind while comic accurate references are always nice and have become more commonplace in the MCU, at the end of the day some divination from the origin isn’t the end of the world and not all comics can be seamlessly adapted to the big screen. We have a few proposed villains to fill out that sixth spot below, and we highly encourage you to let us know who YOU would cast for your Sinister Six.

Once again let me clarify, not Rey. Unlike some of the speculation surrounding previous entries, Mysterio is mentioned by name in the No Way Home Trailer. The only issue is, it’s mentioned in past tense as Peter Parker is questioned surrounding the Death of Mysterio. However there are no rules of time and space in the multiverse, we could 10/10 still see an appearance from Jake Gyllenhaal’s Mysterio from a timeline before his death or even one where he is still alive. Canonically, Mysterio was a part of the original Sinister Six under Doctor Octopus.

Another later meme bet of the Six, and another highly theorized addition to the lineup, some fans believe Lizard can be seen swiping at Peter during a brief scene in the trailer. While his role may not have been as Iconic as a Green Goblin or Doc Oc, The Lizard would see another entry from the Andrew Garfield era of the Spider-Man Franchise.

This one may come as a surprise but here me out. During the closing scene of Spider-Man: Homecoming we witness Michael Keaton’s Vulture being into his jail cell when he has an intriguing encounter with another inmate boasting a very recognizable scorpion tattoo. The two exchange some words about Spider-Man before the movie cuts to black. Could we finally be seeing the long-awaited debut of Scorpion? If Keaton decides to reprise his role as Vulture, I’d say the odds are significantly better, if nothing else than for a minor cameo role.

We spoke earlier about the use of Pumpkin bombs signaling the return of Defoe’s Green Goblin to the big screen. However, a few skeptics are saying this could be a ploy on Marvel’s part to reintroduce the Hob Goblin. While Harry Osbourne, the James Franco version, maybe a little unlikely due to some personal legal encounters, there is another Hob Goblin yet to be seen. Ned Leeds takes over the role of Parker’s best friend for the No Way Home Series but this character has a more significant role as well should the comics be any indication. Ned Leeds can be seen during the trailer under investigation for the alleged crimes Spider-Man has committed. We get a little more to this as we can hear Peter explaining how all of the publicity is hurting the people around him. Will this be the plot to lead Mr. Leeds in his endeavors against Spider-Man as the Hob Goblin? Hey, it’s comic-friendly!

These are just a few options of possible villains we could be seeing in the up-and-coming Spider-Man: No Way Home movie set for this Christmas. Let’s us know who YOU think should be featured in the film and what you thought of our list below! Check out more articles just like this one right here as well!