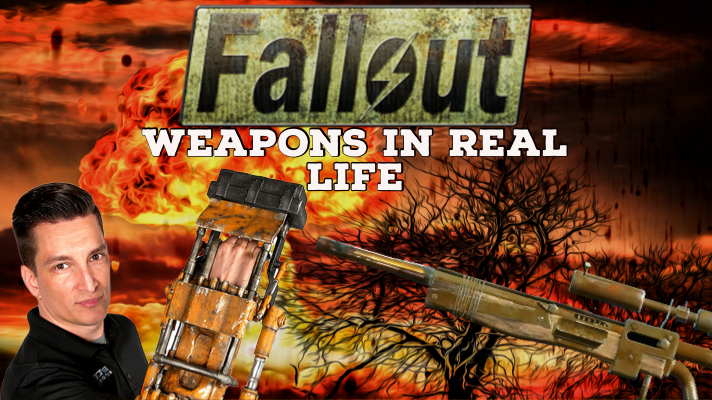 If you’ve ever found yourself dismembering raiders in The Capital Wasteland with projectile coffee mugs and railroad spikes only to long for a reality where these implements if destruction exist, you’re not alone! Fortunately for us, the super-nerd exists. The following are some of the wildest and most impressive recreations of our favorite Fallout weapons!

Kicking it off with Ol’ Fisto himself, the Power Fist has been a Fallout series name stay. While having a few alterations throughout the years the base idea has remained the same, hydraulic metal fist. Often accompanied by rusty barbs on the end, The power fist is a melee build best friend. This real life adaptation hits the nail right on the head! Modeled off the basic Fallout 4 style Power Fist, this iteration is designed using compression similar to the in game design in order to propel the fist forward. Even to those who aren’t familiar with the Fallout series, this thing is 100% badass!

Continuing on with the both visually pleasing and lore accurate, This adaptation of the popular melee weapon, The Shiskebab, is constructed using almost the same concept design as in the game! Mirroring it’s virtual counterpart the real life model uses a motorcycle handle at the helm and three burners along the blade to deliver a scolding cut. Unlike the game design however, rather than having a front facing nozzle to expel the flammable gas, the creators opted for the more realistic and sensical fuel rod along the side witch is ignited by a park in the center of the blade. That being said, visually this model is still to the tee even going as far as to include the false nozzle and gas spicket.

Fallout 4’s creation engine gave a new lease to basic melee weapons the series had included from day one. With the inclusion of the revamped weapons workbench, and more damn aluminium than you’d ever thought you’d need in your entire life, normal everyday blunt objects became weapons of mass destruction. One of the simplest yet most satisfying of the bunch however is the Rocket Bat. With multiple alterations, the baseball bat changes from a throwaway scrap piece of wood to a jet propelled killing machine. Two rocket thrusters bolted to a swatter, what’s more american than that? The real life adaptation is not far off! While significantly smaller rockets are used, for obvious reasons, this adaptation is nearly spot on in every sense of the word!

Unlike the previous entries this adaptation of Fallout 4’s Pipe Rifle does not follow the in game schematic. While the in game rifle is calipered in .38 rounds, the real life model is a simple BB build. While there is a significant difference in stopping power, this BB adaptation may be the most accurate and functional real life design, unlike some other cosplay designs. Hell, you’ve played the game, feels like a BB gun anyway.

Now unlike the rest of the entries on this list, this one does not come to us straight off the screen of post-apocalyptia. While this laser rifle is NOT inspired by the fallout series, it is the most accurate recreation of one. While other cosplays may have the dimensions and appearance, none can lay claim to actually being able to disburse a functioning beam. Now this is one badass piece of science!